Saturday was Lucas’s first bath, well first bath at the hands of his parents. Man I had forgotten how to bathe a newborn, had to watch the video of Isabella’s first bath as a refresher. Lucas was very active in the womb, and he still likes to wiggle, bath time was no exception, I had my hands full just trying to keep hold of him. We were just about finished with his bath and I thought to myself, mmmm the sprinkler attachment hasn’t fired. So I told Lucas to let it rip, I need to be christened at some stage, instantaneously he let rip, by the amount of flow he had been holding it in awhile. So I’ve been christened and my shirt was washed straight away. It’s good to see he listens to his father, his sister on the other hands usually chooses not to.

We haven’t been lucky with the sleeping again, he seems to like cluster feeding for the first half of the night, after that we can usually get longer sleeps from him. His yellowness started to get bad yesterday and the fear of heading back into hospital was swelling around our heads, thankfully yesterday was sunny and we were able to bathe regularly in that lovely sunshine resulting in much less yellowness today, let me say woohoo to not going back to hospital.

We are all well and would like to say sorry to the people we haven’t been able to get back to. Hopefully most people understand that much of mummy & bub’s day revolves around sleeping, eating and very little of anything else. Grandma & Isabella are keeping each other occupied and Daddy, aka me has been studying and making time to set up our new fish tank, it’s starting to look good, driftwood, plants, it’s just lacking the fish but thankfully it’s mostly cycled/matured and ready for starter fish.

P.S. I’ve uploaded some video of Mummy & Lucas to our video site. 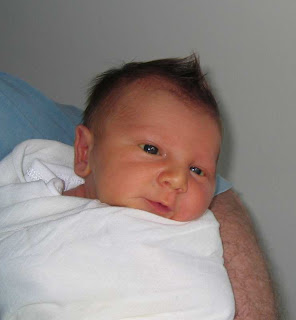 Lucas With Eyes Open
Posted by Jason at 12:13 am

you're not a parent until you've been "anointed". Wear that shirt with pride.