It’s been twenty years since the student / citizens protests in China, cumulating the in Tiananmen Square Massacre, in Singapore the media refer to it as the Tiananmen Incident, from what I’ve been reading lately in China its just not referred to at all, sounds like anyone that wants to make an issue of it there has to endure ‘re-education’ or relocation. It’s hard to believe that this would still happen in 2009. I guess I’ve just had a relative lucky and free upbringing. I’m starting to believe the old adage ‘Truth will prevail’ is a load of crock, the truth about the events leading up, during and after the 4th June 1989 will most likely never see the light of day, tit bits and disjointed information is all the world has to go on, well the world other the China. The Chinese people have next to no information regarding the ‘incident’, as for the government, who knows what they know, maybe nothing now, maybe the magic eraser has been waved. I guess because I’ve mentioned ‘Tiananmen’ & “Massacre” in the same space the Chinese Internet Police, suggested to number between 30,000 and 40,000 people have already blocked my blog from reaching their shores. This may be a dream job for some, spending all day surfing the net under the guise of working. There I go again, distracted the by pretty flashing lights and forgetting about my rant.

Back to it, I’ve read much over the past few weeks, conflicting information too. Some suggest the ‘massacre’ didn’t happen in the Square but on the roadways leading to the Square, from some of the images and footage I’ve seen this is partly true, that is shooting and the tanks rolling on over did happen outside the Square but by the looks of other images and footage it also happened in the Square, and it must be a damn big square to make all those tanks look so small. Speaking of tanks, it was the ‘Tank Man’ that started me on my little rummage around for information. Tank Man for those who don’t know is the one of the names given to the guy that blocked the passage of a line of tanks travelling alone Chang'an Avenue (the Avenue of Eternal Peace) on the day after the ‘incident’, see picture below. The tanks tried to go around him but he again moved into their way, at one stage he even climbed onto the tank and appeared to be talking to the solders. Eventually he was taken away by either concerned civilians or as some suggest by the secret police. Either way he has never been (publicly) heard from again, executed or in hiding the mystery goes on. He may even be alive and not know that he is famous as images and footage of these events are usually stoped from reaching China. As for the images and footage of this guy, none ever captured his face adding to the mystery.
Tank Man - lone citizen vs. PLA tanks, Tiananmen Square, 1989
(Jeff Widener - Associated Press) 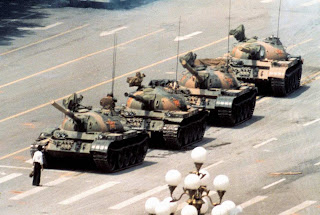 It is sad to read that many people shot where actually inside their homes at the time, apparently as the APC (tanks) rolled towards the Square there was indiscriminate shooting into the surrounding, which happened to include people homes / apartments, there is even footage of and ambulance going to the aid of the injured when it too is shot up and crashes. In the end the official death toll for the ‘Incident’ was 241, the Chinese Red Cross initially reported there were at least 2600 dead, but I understand the government encouraged them to reassess this figure. Non-official sources indicated the death toll range was from about 1000 to 7000 and as many as 30,000 injured. Our history, even our relatively recent history has unfortunately provided the world with many massacres, last years I was reading with disbelieve about some of the massacres, mass killing and ethic cleansing that have happened in Africa, principally I was reading about Rwanda and Darfur (Sudan), how can people hate others so much, even when they don’t know them personally just because they are from a different clan or religion or on the wrong side of the government!

For those interested, this is a good but long video report of the Tiananmen Square Incident, http://video.google.com/videoplay?docid=2300254722104314948 (running time, 52 minute, produced by SBS).
Here is another site for videos on this incident.
http://www.pbs.org/wgbh/pages/frontline/tankman/view/.
For those interested in reading some more about the whole ‘incident’ try this link.
http://asianhistory.about.com/od/china/a/TiananmenSquare.htm
Posted by Jason at 3:55 pm No comments: 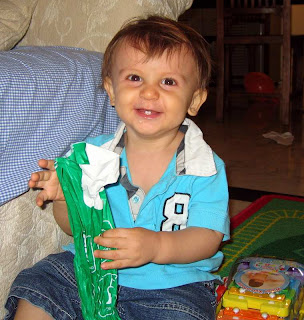 Wrapping Paper, Give Me More 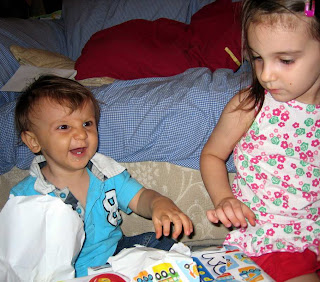 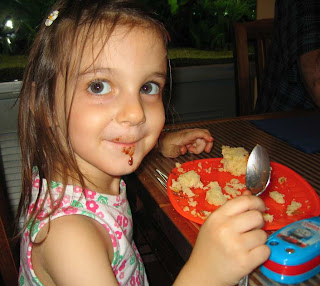 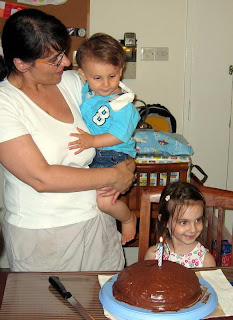 Is That Cake For Me? 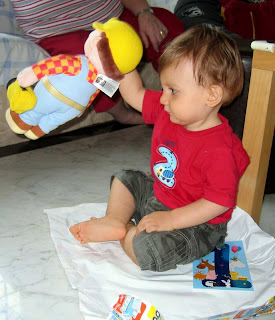 Lucas is One Today

The Spudsters turns one today, our little rolly polly boy isn’t so rolly any more, he’s actually slimmed down over the past six months but he still weights in around 11 kilograms, about the same weight he was at eight months old. He’s more active these days, even walking some, nice change to the barrel roll he mastered before he could crawl, speaking of crawling he’s decided his favourite style is commando crawl and he is surprising quick at time. He’s getting rather tall, standing in now at about 81 centimetres. He is also sporting four teeth; all four are front and centre, two up and two down, perfect for biting things like my big toe and his highchair armrest.

Lucas’ Grandma and Grandad (also know as my parents) came to visit and celebrate his first birthday along with my cousin and her family, and yes the two relatively quiet three years olds went berserk just like at Isabella’s birthday. Spud seemed to have fun for his birthday, he’s thinking cake might be worth trying again and he loved playing with his new toys and making noise. Our kids have way too many toys; we could have a room just for toys. Better still maybe we can find a charity that could put them to good use.

P.S. Ours kids don’t need any more toys at the moment, or any stuffed animals, teddy’s etc. All they need is the love of their family and friends and maybe some sugary goodness!
Posted by Jason at 12:07 am No comments:

My parents arrived for a week’s visit yesterday so I decided to catch the MRT (train) to the airport to meet them, and a saw the strangest and rather revolting thing on the train. Some guy was chewing gum, and he was chewing it like the typical image many have of Americans chewing gum. I had this barely controllable urge to reach out and slap him and make him spit it out. It just seemed revolting to see, I keep trying to change my line of vision so he wasn’t in it, thankfully somebody ending up standing between us blocking my view. You just don’t see people chewing gum in Singapore, mostly because it illegal to have here unless it is for medical reasons (I assume this means anti-smoking gum is okay). Don’t get me wrong I see chewing gum can be good for you mouth and breath, but why oh why do people insist on chewing like a cow, cows need to chew the cud, unless your gum tastes like grass, don’t chew like a cow!
Posted by Jason at 1:16 pm No comments: 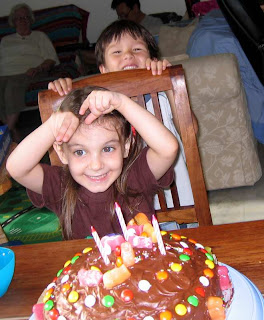 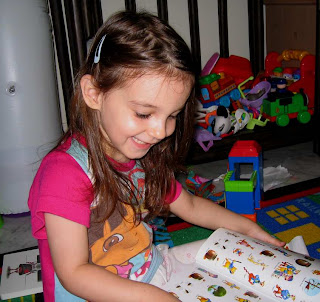 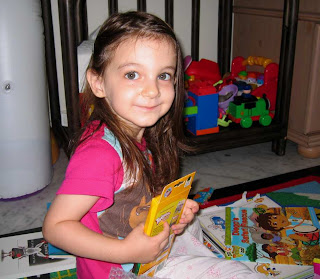 Woohoo Pens & Colouring Books
Posted by Jason at 12:58 am No comments:

Our little girl turns three today, they seem to grow so very quickly compared to us of the taller stature. She speaks rather well, with better English dictation then I with the likes of ‘may I please have a (insert sugary goodness item here)’ but other time its just ‘I want, I want (sugary goodness)’. Yes I know for a three year old, sugary goodness is there food lifeline. Isabella had a nice time playing with her friend Lochie and her cousin Holly who is also three, and boy oh boy two relatively quiet three year old girls can become noisy monster very quickly, which had something to do with the above mentioned sugary goodness!

For those interested Isabella is weights nearly 13 kilograms and is 95 centimetres tall!
Posted by Jason at 12:42 am No comments: