Well today was a memorable day for two reasons. It was Marika’s birthday (25 again I hear you say!!) and Isabella took her first swim. She wore her brand new swimsuit, courtesy of Aunty Sandra and Uncle Derek, and braved the warm pool. She took to the water like a little duckling with her special nappy floatation device. Mum and dad paddled around with Miss Bella then it was time to get out and get ready for dinner. We went to an Indian restaurant not far from our place and while there Bella showed us her vocal capacity. She is starting to talk more and more – Jason thinks she takes after me – and likes to chat to us whenever she can.We had a great day.
Posted by Jason at 10:04 pm No comments:

Random Thoughts for a Rainy Day

Yet again it’s been awhile since our last blog update, life with a little one is usually busy. I was going to say newborn but I assume she is no longer considered a newborn, not sure when they stop being a newborn and move onto being a, mmmm what are they called next, I wouldn’t call her a toddler as she doesn’t toddle yet, maybe its just baby, but to us she not a baby but a little person. No disrespect to short people, hobbits and others that maybe considered vertically challenged. As I can type this blog with Bella on my lap then I should be able to do the same with work, but alas I don’t feel I’m doing enough work. Speaking of Bella and sitting on my lap, it’s just weird when she is sitting there jabbering away the her face starts to go red and grunting sounds begin, oh yes she is poohing on my lap, well hopefully it all stays inside the nappy and doesn’t escape onto my lap. Damn that lightning and instant thunder was just outside the window, made me jump and scared the crap out of Bella; thankfully she had already poohed today, don’t worry she is okay now. It rains regularly in Singapore, but it is usually heavy and quick, over and gone in half an hour or so, but lately it’s been heavy, with big lightning shows and can go for hours, even days. Mmmm, what’s that smell, maybe the lightning & thunder really did scare the crap out of Bella, damn there it goes again, and even the windows are shaking. Maybe I should save this draft blog and shut down the PC for a while.

We’re back, the lightning seems to have finished but the rain is still pouring down. Yes there was movement at the station, little Bella had filled her nappy for the second time in an hour, surprising as she rarely poohs more than once in a day, I know you all wanted to know that! With all this rain we have a leak in the apartment; strangely it’s just below where they have been working on the windows in the apartment above ours this morning, champion workmanship! To be politically correct I guess I should have written workpersonship, but Mr MS Word spellchecker is telling me that this is not a word, doesn’t matter they were both males so workmanship is okay.

Binski the cat that adopted us then had her babies on our bed in the early hours of the morning; well her babies are now one (human) year old, I’m not sure if there are cat years, I vaguely remember that there is an expression of dog years. Her babies are no longer those fluffy little bundles of speed and little claws I remember climbing up my bare legs and across my back, it’s amazing how those little claws could even be felt through my clothing not to mention all the little scratches on my legs, anyhow those little kitten are now fully grown cats and don’t look anything like they use too.

The traffic on the expressway I can see from our apartment is almost a parking lot in both directions due to all the rain, how I don’t miss the commute to work, one of the joys of working from home, let me say that again, I don’t miss the commutes to work, especially the sardine packed train commutes.
Bella got her latest lot of immunisations last Wednesday, tears for a short time then she was okay, unlike last time when she mostly just slept, this time she has been grumpy and not sleeping much. Speaking of sleep its time I put her to bed so I can get some lunch and do a little work (if she sleeps). Our tubby little Bella is now 6.8kg and 63cm long and is now four months old. Anyhow I think I’ve ranted on enough for now, see ya later and enjoy your day!
Posted by Jason at 3:45 pm No comments:

Crikey Steve Irwin the Crocodile Hunter taken out by a Stingray

The King of Australian cultural cringe, the ocker in the khaki has met his demise at the hands, well barb, of a Stingray. I think to many Australians his behaviour made them cringe, mainly because he embraced the ocker within while many of us tried to leave it behind in favour of the world’s mono-generous persona, sadly based on that of American TV & movies. To honour his life’s work maybe we all should start using ‘crikey’, it’s a good word, I’ve used it before, I’ve even used it a few times here in Singapore. If we dig deeper perhaps some other lost words will surface, struth I reckon a good ol’ Captain Cook at our past will spotlight some Aussie expressions quicker than a rat up a drain pipe, tomorrow arvo perhaps I should sit down and work on this idea if I’m not flat out like a lizard drinking, fair suck on the sauce bottle this is becoming all to much to handle.

Once you get past the cringe of the lad in khaki, you will realise he has spent much of his life promoting and protecting Australian wildlife and more recently wildlife world wide. His fame overseas has helped him promote this cause to a much larger audience and to promote Australia as a tourist destination. Hopefully his legacy of protecting the interest of wildlife will go on. Being a new dad my thoughts go out to his kids and wife.
Yes I admit while in Singapore I have watched 'the Crocodile Hunter' on the Discovery Channels.
Posted by Jason at 12:06 am No comments:

Life goes on, Marika is adjusting to being a working mum, and I’m slowly adjusting to my daddy day care role with work on the side. My first two weeks were successful with looking after little Bella however I can’t say the same for my work, I didn’t do anywhere near enough work, however Bella and I have started to develop a better routine so I’ll be able to have good Bella time and manage to work when she is sleeping, however my work day starts around 7am and finishes usually by 10pm, but you can’t argue with three hour lunches and extended morning and afternoon tea’s.

Bella is developing well, her motor skills seem to be improving every day, I think back to the early days she kept getting whacked in the face by these pudgy white things (aka her own hands), then she realised that she could somewhat control these pudgy white things and use them to slap the bottle out of her mouth when she was done drinking, then she realised the pudgy white things had little individual moving parts and that enabled her to pick things up, Woohoo! Her latest trick with the pudgy white things is to grab your hand (well maybe just a finger) that is holding her bottle and pull it away when she is finished drinking, and she is becoming a strong little tyke. Her other new trick is to take something in one hand then pass it to her other hand, I guess we knew her dexterity was improving after her finger up the nose trick.
Posted by Jason at 2:37 pm No comments:

Isabella’s soon to be Nouna (Godmother) Kathy stopped by for a few days on her way back from Europe to little old Melbourne. I think Nouna & Bella hit it off well, there were many smiles and laughs on offer from Bella for us all to enjoy, she is becoming quite the giggler; however her giggles sometimes become screams or hiccups.
Nouna & Isabella 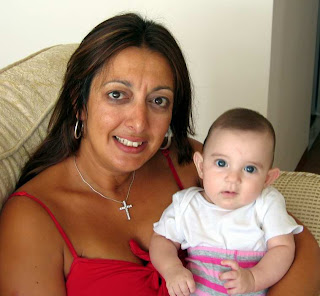